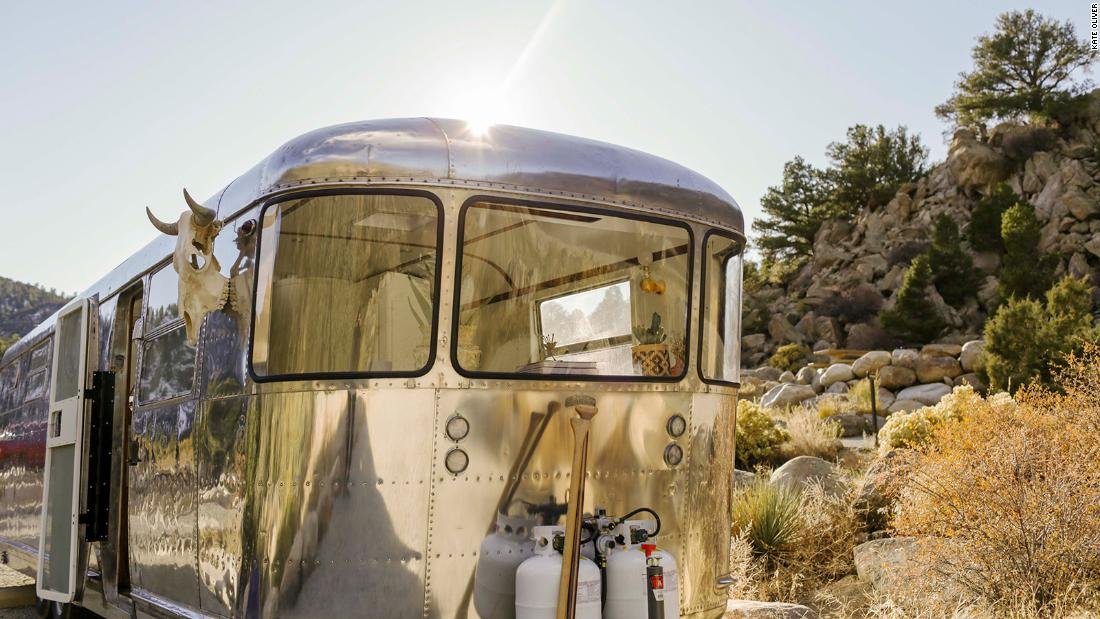 (CNN) — The ability to wake up in a different place every day, live and work in some of the world’s loveliest places, and feel absolute freedom — it’s no wonder that many people dream of life on the road.

Kate Oliver not only succeeded in making van life a reality — but she also turned it into a business. Along with her wife, Ellen Prasse, Oliver launched The Modern Caravan, a business that took them all over America as they repaired old Airstream camper vans — a business built on the back of their gorgeous renovation of their first Airstream, Louise.
Now Oliver has published a book, “The Modern Caravan” — something of a meditation on van life, profiling people who have restored their own vans, looking at their lifestyle and renovation tips. But it’s also a guide to Oliver and Prasse’s aesthetic, and how to achieve that DIY-style. Because, they say, everyone loves the open road — even if we don’t quite know why.

Dreaming of another life

Oliver says we all have a hankering for the open road.

Growing up in the Midwest, Oliver felt out of place. “I never really felt like I fit, and I didn’t have an easy childhood,” she says. Instead, she retreated into her imagination, calling the local library her “escape.”

“Initially it was all fiction, then one day I wandered up and found architecture and interior design books, and I thought, ‘Oh my god, those are real places, they exist somewhere with people in them,'” she says.

“There was something in those pages and photographs that I could just imagine myself into. Obviously the photos were staged, and my nine-year-old mind didn’t know that, but there was often food on a counter being prepared, and I imagined the whole scenario playing out. I thought, I want that kind of life, full of gatherings.”

She got that different lifestyle — though in a rather different way than she’d imagined, from looking at those library books.

‘What if we sold everything?’

Oliver and her wife wanted more for their daughter. On the road, they found it.

In 2013, Oliver and Prasse had started talking about the future. They wanted something more for them and their four-year-old daughter, but weren’t quite sure what.

“For six months, we’d sit up every night drinking tea, talking about what that meant,” she says.

“We never really came to a conclusion, but one morning in January 2014, I stumbled across some photos of a band on tour. Someone in the band seemingly had a kid and was taking their kid on tour.”

It was a light bulb moment.

“That was it — I thought, I know we don’t have a van but that’s what we need to do. I texted my wife at work, and said, what if we sold everything, bought a van and traveled — and she said yes.”

That, as Oliver says, was that. The next morning, as Prasse went to work, Oliver got to work, planning their lifestyle change. Back in 2014, she said, “it wasn’t really common — van life wasn’t a thing.” She also admits, “We didn’t know what was coming.”

The grind to build a home

Some people live permanently on the road, others park up in their gardens.

Because from pictures on Instagram, turning an Airstream into a natty home looks pretty glamorous. In fact, says Oliver, it was difficult, not always pleasant, and heavy-duty labor.

“We hoped we’d find a really cool vintage Airstream, and maybe paint it a bit,” she says. After several months, they found one that seemed to fit the bill — but then they took it home.

“Once we started doing the basic digging in, we said, ‘Oh my god, this is a much bigger project.'”

Mice had chewed through the electrics, meaning the entire thing had to be rewired. The interiors needed huge work, too.

“Within a few months we’d taken the entire thing down to the chassis and the shell,” says Oliver.

“You could stand with your feet on the earth but still in your trailer.”

Oliver had no experience at all with renovation or building work, but Prasse had — her mother is an electrical engineer, and she’d learned from her “fix it” family. A love of sculpture also meant she was good with her hands, and had an eye for what worked.

In her book, Oliver talks about the physicality of the work — tough manual labor that changed them physically. That she enjoyed it was a surprise, she says: “Once I got into a flow I really enjoyed the physical labor, and I was amazed at how well our strengths and weaknesses played off each other. Where I didn’t have a strength she did, and vice versa.”

Today, people looking at their finished products or flicking through Oliver’s book won’t see the “sweat, tears and cursing” she says goes into a van rebuild — not least because of all the layers of work.

“Normally a contractor building a house has someone coming in to do the electrical work, plumbing, drywall, custom cabinetry, or custom furniture,” she says.

The only thing they don’t do anymore? Upholstery. “We’ll happily wield the power tools but when it comes to the sewing machine we need professionals,” says Oliver.

Oliver and Prasse have renovated 12 Airstreams, including three they lived in themselves.

It took a year to renovate the van they would christen Louise. During that time, they sold their house and moved into the van, creating their home as they lived in it. Eighteen months later, they were on the road. They traveled across the States in Louise, bedding down in the desert and beside the ocean, living the van life dream.

It was while they were on the road that they realized that they could make a business out of renovation. The idea was simple: to travel in their Airstream to clients’ houses, where they would work onsite, doing Louise-style transformations of old jalopies into sleek campers.

Nowadays, with the proliferation of the “van life” movement, and companies offering transformation services everywhere, it’d be hard to make a name for yourselves. But in 2017 it was easier.

“We were in the sweet spot where the travel lifestyle was taking off, not a lot of others were doing what we were doing, and Instagram was about organic growth,” says Oliver.

They traveled across the States — by this time in their second renovated Airstream, June — driving to clients’ houses and doing up their vans on site. Interestingly, most of their clients were women — coupled up but “with their husbands going along with it,” says Oliver.

The book follows van dwellers, like rockclimbers Gabi and Brandon.

It wasn’t all the dream they’d expected, however. In the her book, Oliver talks about experiencing misogyny and homophobia on the job. “Sometimes we want to think we’re more progressive and accepting than we actually are,” she says.

In fact, it was one terrible experience that made them decided to give up their business model of visiting the clients in situ.

“When we started, we wanted to roll our love of travel in with the business, and said we wouldn’t take contracts further out than two years because we wanted to evaluate whether it was working or not,” says Oliver.

“We knew before we went to that last job that it wasn’t very sustainable — we were working insane hours, homeschooling our daughter, working constantly. We weren’t exploring. This was not the way we wanted to do things.”

Around the same time, in early 2019, a friend let them know about a new trailer for sale — the couple immediately said they wanted to buy it, and do it up for themselves.

“We were going to start flipping Airstreams: buying, renovating and then selling them — it felt more doable and safer,” says Oliver. They called their new vehicle Hope. Eventually, they sold her to a woman “to park on her own land, as a way to live in peace and solitude and grow deeper into herself,” as Oliver writes in the book. Their next Airstream? Hawk, in which she wrote it.

Van life in a pandemic

Having a van is your chance to express your personality, says Oliver.

Because, just as they were embarking on this new chapter, Oliver was asked to write about van life. So they jumped back behind Hawk’s newly restored wheel and spent the next year the US, photographing people who were living in renovated Airstreams. They were already talking about potentially settling down, with their daughter ready to start junior high school, when the pandemic hit.

“Covid really forced our hand,” she says. “We were back on the road when the world shut down. Campgrounds were closing, everyone was saying go home, but for nomads, where do you go home to?”

They parked up in the back yard of Prasse’s parents’ house in Kansas, and stayed there for a few months. Then they talked. A studio was a necessity to carry out their renovation work, they decided.

“Staying in my inlaws’ back yard wasn’t an option, so we said, OK, it’s time to settle down,” says Oliver. On June 4, 2020 — she remembers the date instantly — they moved into a house, back in the Midwest.

Nearly two years on, they’re working on their 12th vehicle.

Some keep their vans on their property, as a fuller expression of themselves.

For Oliver, the road is, clearly, life — and she wants to bring that life to the projects they work on for other people. So how do you encapsulate someone’s essence in a camper van?

“I can’t design for someone if I don’t know who they are,” she says. “I like to have really intimate conversations — some are up for that, some are not. We start with how they live now. That’s crucial — for clients wanting to use it as a home it’s important to get a sense of the way they work, and move through a space, so they don’t feel their movements are having to shift.

“I want to know what they do for work, what their style of work is. Do they prefer to sit on a couch, at a desk, do they need a separate workspace?”

Once they’ve talked needs and style, they move on to design. The couple’s signature touches? Frosted Plexiglass doors separating living spaces, and lots of walnut wood to bring the outdoors in.

Oliver is a firm believer of the power of getting out on the road.

“I could see who I was because I had the space and time to think about it. I think a lot of people think of it as escapism — I went to escape my life I didn’t want, and find the life I did [want]. There’s so much distracting us, and we lose sight of ourselves really easily.

“I think people go to find out who they are away from all of that. I think we need to sit in that quiet.”