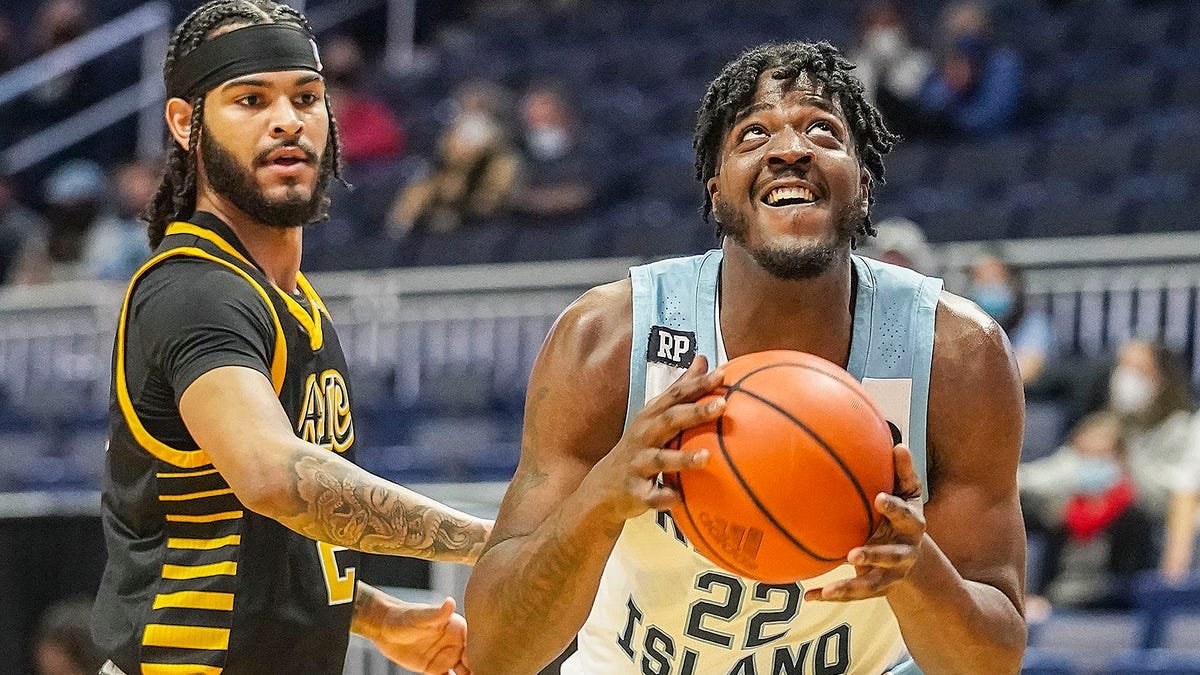 SOUTH KINGSTOWN — Here were 40 minutes of evidence as to why the University of Rhode Island wanted a tune-up before jumping into Atlantic 10 play.

The Rams looked like a team coming off a 20-day pause due to COVID-19. This late booking with American International resulted in a 70-55 victory for the hosts at the Ryan Center, and it wasn’t pretty.

It was, however, to be expected. URI has been out of action since a Dec. 13 blowout win at Milwaukee due to multiple virus positives among players and staff. Nonconference games against Charleston and Brown were canceled prior to league postponements against Dayton and La Salle.

“We didn’t anticipate having these types of breaks coming into the season,” URI coach David Cox said. “We thought it would be different. Obviously, the game today — it looked like we hadn’t played in a few weeks.

“Extremely, extremely rusty out there on both ends of the floor. But it was imperative that we got this game in because we hadn’t played in three weeks. We needed to get the rust off before going on the road for our first two conference games.”

The Rams committed 11 turnovers and were just 6-for-12 from the foul line in the first half against their Division II opposition. That general lack of sharpness plagued them to the final whistle. URI’s considerable physical advantages were enough to secure the right result in this one — the undersized Yellow Jackets finished at just 31.9% from the floor.

“If we started conference like that, it would have been ugly for us,” URI guard Malik Martin said. “I think we needed this game. We’ve got to have two more good practices going into Wednesday and we’ll be fine.”

The Rams are now anticipating opening league play on Wednesday night at George Mason. There are a few points of study they’ll take into that one:

Vaccination rate at 90 percent for Rams

URI (9-3) should be back to full strength entering this week.

Antwan Walker was the lone member of the roster still in health and safety protocols as of Sunday. Cox said the reserve forward is expected back at practice on Monday and should be cleared prior to Wednesday’s tip.

Martin disclosed he and fellow guard Ishmael El-Amin were among those who tested positive for the virus in December. He was asymptomatic but still forced to quarantine in his dorm room for an extended period.

“Obviously it showed on the court today,” Martin said. “We were out of rhythm.”

Cox estimated 90% of the Rams — based on a combined number of 20 players and staff members — are fully vaccinated. Up to five URI players will be eligible for booster shots in the immediate future.

“Obviously the school now has a new mandate for young men and women to come back,” Cox said. “They have to get boosters if they qualify for it.”

The Rams were one of what felt like a minority of programs that didn’t need a pause last season. URI was free to practice and play rescheduled games as they became available. Contingency plans in place for the better part of two years were finally put to the test.

“Having a relatively mature group, I think they handled it extremely well,” Cox said. “They’re eager to get back out here on the court.”

Cox described the process of making a date with AIC as “a mad scramble.”

The Rams found out during their Friday practice La Salle was going to be forced to pull out of its scheduled trip to Kingston. URI wound up contacting the Yellow Jackets (5-7) after their own Northeast-10 game with Le Moyne was postponed due to COVID-19 concerns among the Dolphins.

“We called every team we could possibly call,” Cox said. “We called a number of Division I teams and couldn’t get a bite or couldn’t make it work.

“Late notice, New Year’s Day travel, money — all of those factors. We came up with the best that we could do here.”

The Flyers were among the potential opponents. There were brief discussions between the Rams, Dayton and the conference after a corresponding Sunday postponement between the Flyers and St. Bonaventure. Dayton was unable to secure a charter or late commercial flight reservation to visit URI.

Martin finished one point shy of a double-double, finishing with nine and pulling down 11 rebounds.

The stat sheet was kind to him and a couple of fellow Rams in this one. El-Amin chipped in nine of his 14 points in the second half and connected on all but one of his five 3-point attempts. Makhi Mitchell was 7-for-8 from the field while collecting 19 points and eight rebounds.

URI shot 48.1% in the first half but faded to 38.7% after the break. AIC found it particularly tough going through the opening 20 minutes, finishing at 25% from the field and 2-for-12 from 3-point range. Frankyn Batista totaled 14 points and 14 rebounds for the Yellow Jackets while Carlos Hubb hit double figures with 13 points.

The Rams improved to 4-0 all-time against AIC, winning the first meeting since the 1941-42 season. Frank Keaney was URI’s head coach and started 60-40 through his first 100 career games. Cox improved to 58-42 thanks to Sunday’s victory, hitting the century mark midway through his fourth season in charge.

SOUTH KINGSTOWN — It will be at least another week before the University of Rhode Island women open their Atlantic 10 conference schedule.

The Rams have had a second league game postponed, this time on Wednesday against Massachusetts. Both programs remain on pause due to COVID-19.

The conference made the announcement on Sunday, exactly seven days before URI will travel to Fordham for a noon tip in the Bronx. The Rams have been idle since finishing their non-conference schedule on Dec. 19 with a victory over Boston University.

URI improved to 10-3 thanks to a three-game winning streak, including the 54-44 triumph over the Terriers. The Rams won their first seven games of the season, dropped the next three and rebounded into the exam break. That momentum has been lost thanks to what is now an extended absence.

New Year’s Day was supposed to mark the opening of URI’s league season. The Rams were set to welcome Dayton prior to reporting virus issues within their program. Those have yet to subside.