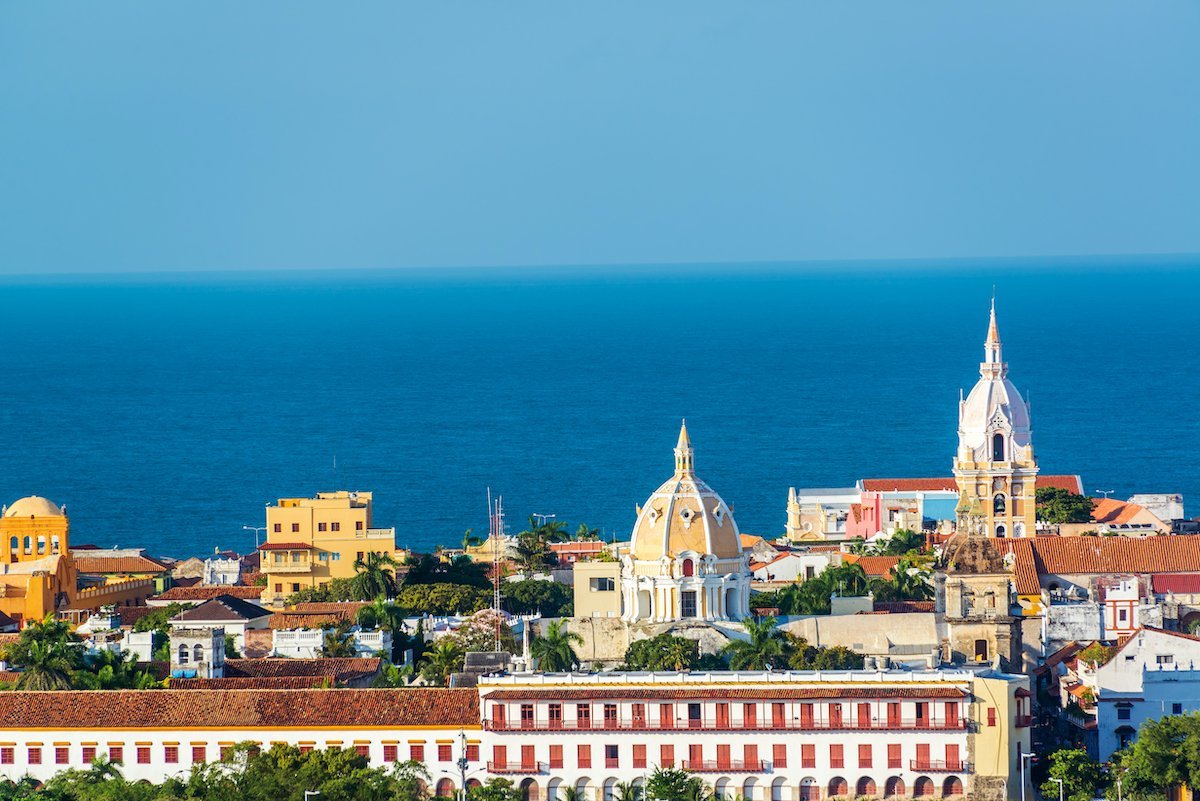 The word best comes up frequently when retirees and expats talk about living in the South American country of Colombia.

You’re likely to hear, for instance, that Colombia produces the world’s best coffee, that the beaches are among the best in the world, and that the bird-watching opportunities are better than any others around the globe.

There will probably also be mentions of the wonderful climate, the vibrant cities, and the low cost of living.

Jacob Bushmaker, an expat from the United States, counts his move to Colombia among his best choices ever. “Without a doubt, moving down here has been the best decision of my life,” he said. Other expats are similarly smitten with their new home.

Colombia, located at the northern tip of the South American continent, has been rapidly growing in popularity as a spot for expats and retirees alike. When International Living recently released its list of the best places to retire in 2021, Colombia came in at number four, behind Costa Rica, Panama, and Mexico.

Based on the increasing online buzz and the recommendations from several expats already living in Colombia, here are nine reasons the country is so popular with retirees.

1. The Cost Of Living

While affordability is relative to your previous location and your lifestyle, expats agree that the cost of living is significantly less in Colombia than in North America.

Expat Alex Davis of Ryan and Alex Duo Life says the cost of living in the city of Medellín, Colombia, is about 20 to 30 percent of what she and her husband had experienced in their previous home of Fort Worth, Texas.

And some things, like groceries and fresh produce, are even less expensive. Davis says buying food at an organic market in Colombia is about 10 percent of the price it was in Texas. A full week’s worth of organic groceries for two costs between $10 and $15 in her new home.

Likewise, expat Wesley Jacobs, who moved from Tacoma, Washington, to Cartagena, Colombia, reports that his total monthly expenses went from about $4,000 in Washington to $880 in Colombia. “Rent, food, and transportation are my biggest expenses, and each is dramatically less expensive here than in the United States,” he said.

Bushmaker, the traveler behind The Wandering Climber, moved from Seattle to Medellín several years ago and says his expenses are 20 percent of what he was paying in the U.S. For a spacious two-bedroom, two-bath apartment in the Laureles neighborhood, one of the most popular expat spots, Bushmaker pays $295 per month.

International Living says a retired couple can live in many cities around Colombia for $2,000 per month or less.

Another thing the expats are unanimous on is that healthcare is not lacking in Colombia. In fact, they say, it rivals and sometimes surpasses medical care in the U.S.

Bushmaker recommends opting for Colombia’s private SURA plan, which he said offers world-class healthcare. He pays about $85 per month for the basic plan, which covers 10 doctor visits a year.

Davis agrees that Colombia’s healthcare is excellent. “It is also easy to navigate, even for someone with beginner Spanish,” she added. Through research and recommendations, she has been able to find many English-speaking doctors.

Jacobs, whose career specialty is healthcare, noted that before the COVID pandemic, Colombia’s high-quality healthcare had been attracting thousands of medical tourists a year. And even with the recent limitations, he said people continue to travel to Colombia for procedures.

For those receiving monthly Social Security income of about $750 (three times Colombia’s minimum monthly wage of $262) or $2,500 from a private pension or 401(k), a retirement visa is available.

Basic information can be found on the government’s website, and a quick internet search will yield many private websites offering advice. According to online sources, the visa is valid for three years and can be renewed. Retirees can apply for a Colombia resident visa after having a retirement visa for five years.

While Davis and her husband are “pre-tired” from their previous jobs as engineers, they know many retirees in their 50s to 70s who have been happily retired in Colombia for more than a decade.

The retirement visa is just one of a host of visa options in Colombia, and Davis said she and her husband qualified for an investment visa when they bought a home for more than $145,000.

It would be hard to exaggerate the appeal of the climate of Colombia, where the proximity to the equator keeps temperatures balmy year-round. In Medellín, the average high hovers in the 80-to-83-degree range for the entire year, and average lows are consistently in the 63-to-64-degree range.

“Known as the ‘City of Eternal Spring,’ Medellín has perfect year-round weather,” Davis said. “It’s lush and verdant, so while you’re in a city of two million, you still feel like you’re living in a jungle.”

Cartagena in the coastal region is similarly consistent, although a bit warmer, with average highs in the 88-to-89-degree range all year long, and average lows in the high 70s.

5. The Availability Of Flights To North America

Major U.S.-based airlines offer nonstop flights to Colombian cities such as Medellín, Bogotá, Cartagena, Cali, and Cartagena. And because Colombia is in the far northern region of South America, the flights from the U.S. tend to be of manageable duration.

From airports in the southern U.S., nonstop flights to Bogotá range from 3 to 5 hours. Nonstop flights from New York City’s John F. Kennedy International Airport are less than 6 hours.

Colombia appears to have long since moved past its dark days of the drug cartels in the 1980s and 1990s, and the expats we talked to all said they feel safe in their Colombian homes.

“I’ve been living in Medellín for three years, and not one time have I felt unsafe,” Bushmaker said. “Just like in the U.S., you need to be cautious in certain parts of town, especially at night.” But as long as you take common-sense precautions, he said, you can rest assured that it is a perfectly safe place to live.

Jacobs suggests heeding the local expression No dar papaya (loosely translated: Don’t show your valuables or put yourself in a vulnerable position). “Dress modestly, don’t flash valuables, and don’t drink in excess — you won’t have any problems!” he said.

Davis acknowledged that friends have sometimes questioned her move to Medellín, given its history as the one-time home of Pablo Escobar, former head of the Medellín Cartel. But the city has changed quite a bit since then. “Locals here will be quick to change your opinion of Medellín and shed some light on the transformation that the city has undergone since the 1990s,” she said.

Having lived in 12 countries around the world, Davis said that “Colombia feels no different, and, frankly, sometimes safer.” Still, she said it would be naive to think the whole country is safe, and it is important to do your research.

The U.S. Department of State states that while Colombia has transformed itself over the past 20 years “from a fragile state into a vibrant democracy,” visitors should still be cautious of things like civil unrest, crime, terrorism, and kidnapping.

The State Department’s Overseas Security Advisory Council website reports that Bogotá and other large cities in Colombia share many of the crime problems that plague big cities around the world, such as mugging, assault, cell phone theft, credit card fraud, and burglary. But it added that Colombia’s tourist areas like Cartagena experience considerably lower crime rates and that crime there rarely turns violent.

7. The Proximity To Two Sea Coasts

Like its neighboring nation Panama, Colombia is twice blessed in the ocean department, with the Pacific to the west and the Caribbean to the northeast.

The two seas, with their different vibes, offer plenty of choices for retirees and expats. Jacobs, who lives in Cartagena on the Caribbean side, notes that there is a small but active community of expats there.

And on the Pacific side — known as Colombia’s best-kept secret — is the city of Cali, capital of salsa music, gastronomy, and festivals.

Colombia’s coastline totals nearly 2,000 miles, and that means that the country offers countless gorgeous beaches. The choices include standouts like Santa Marta, a captivating city that straddles the mountains and the Caribbean, and tropical island gems like San Andrés, Tintipán, and Baru.

Bogotá, the country’s largest city, is known as Colombia’s melting pot, and Davis describes Medellín, the second-largest city, as “a South American Hong Kong — just as mountainous and jungly. Just as chic and hip.”

While all of the major cities are worthy of visits, exploring Cartagena’s Old Town, a UNESCO World Heritage site, is among the bucket-list experiences Colombia has to offer.

Or, for a place rich with indigenous culture, visitors are attracted to the little town of Guatapé, one of the most colorful cities in South America.

As one of the most biodiverse countries in the world, Colombia is home not only to mountains, beaches, waterfalls, and rainforests, but also to the most bird, amphibian, butterfly, and frog species anywhere in the world.

All of those natural wonders lend themselves to stellar bird-watching, mountain biking, hiking, and scuba diving.

Pro Tip: Even with all its natural wonders, Colombia’s biggest claim to fame might just be its coffee culture. With conditions that produce arguably the finest coffee beans on the planet, Colombia is consistently named one of the places to get the best cup of coffee in the world.

Want to learn more? No matter where you plan to spend your retirement years, Personal Capital wants to help! Read about their expert financial advising and retirement planning services here.